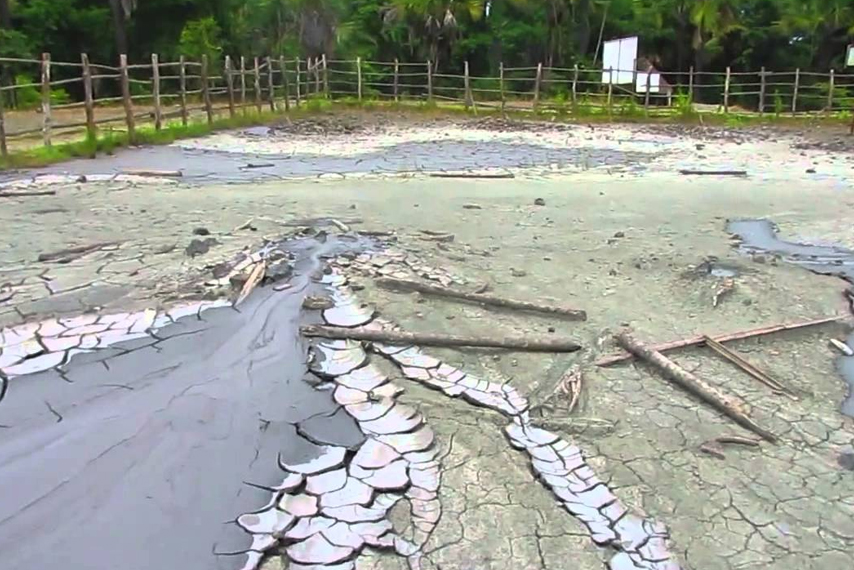 The Baratang Island is located about 100 kilometres from Port Blair. This island is surreally beautiful with exquisite beaches, shady and mysterious looking snaking mangrove creeks, unique mud volcanoes and dark, ancient limestone caves. The thrill of exploring the narrow and mysterious limestone caves that are a result of sedimentary rock formations are truly exhilarating. The hike through the jungle and a stretch of no-man’s land before you reach the maze of dark caves is really exciting. After crossing the thickets surrounding the area, the actual journey into the cave forms an out-of-the-world experience.

The mud volcanoes in Diglipur are sort of enlivening as you watch an array of approximately 41 effervescent muddy pits that oozes out mud as in a volcano. This mud volcano phenomenon is undoubtedly a natural wonder and the area is surrounded by thick woods. The craters of the mud volcanoes emit natural gas created by the decaying matter below the surface. This ebullient chapter of Andaman promises great fun and involves a day trip from Port Blair. 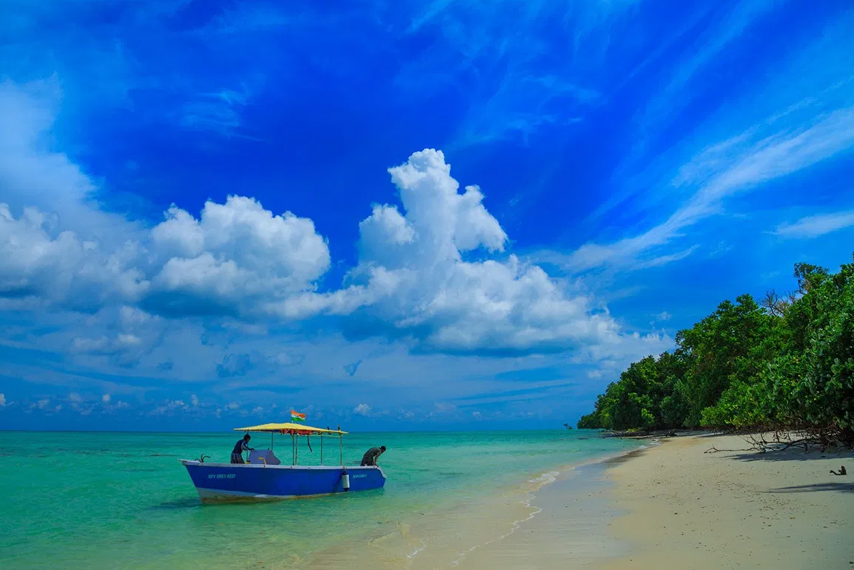 The Andaman and Nicobar Islands form a picturesque archipelago in the middle of the vast seas of Bay of Bengal somewhere between India and Bangladesh. The colour of the ocean waters around the islands is a scintillating blue. The sparkling blue crystal clear waters will fascinate the tourists beyond measure and will promise an exquisite vacation on the pristine beaches among plentiful water activities. Andaman gives you a chance to breath fresh sea beauty. The soothing blue shades of the ocean is exquisitely punctuated by brilliantly coloured corals and this rich coral reef attracts a huge variety of colourful marine lives that creates a mysterious and enchanting underwater world. This marine world together with the powdery white sandy beaches create a small heaven on earth for you to enjoy. 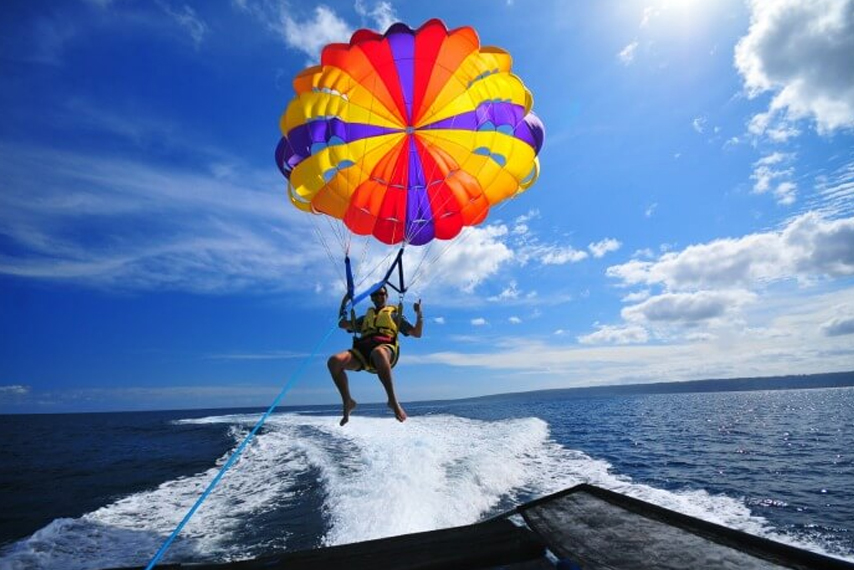 The variety of adventure activities available in Andamans makes this place alluring for adrenalin junkies. One can have a lot of fun with the entire family in a bubbly Banana Boat Ride or go for a fantastic spin on a jet boat ride across the vast open seas. The semi submarine or the Dolphin ride can call for immense fun and excitement along with the family. Apart from that there is the thrill of Snorkelling, Undersea Walking and Scuba Diving that gives you a chance to experience the magical beauty of the underwater world with its colourful and vibrant corals and a huge range of fascinating sea creatures that swim or play around. Fly high over the shimmering turquoise blue seas for an exciting Parasailing or Paragliding adventure and feel the freshness of the air around. The frantic thrill of cruising or Speed Boating across the deep blue waters is also quite thrilling. Fishing enthusiasts can go for Sport Fishing or Angling in the wide open seas and also enjoy the vastness of the cool seas apart from the joy of watching brilliant sunset and sunrise scenes.

The Tale of Cellular Jail 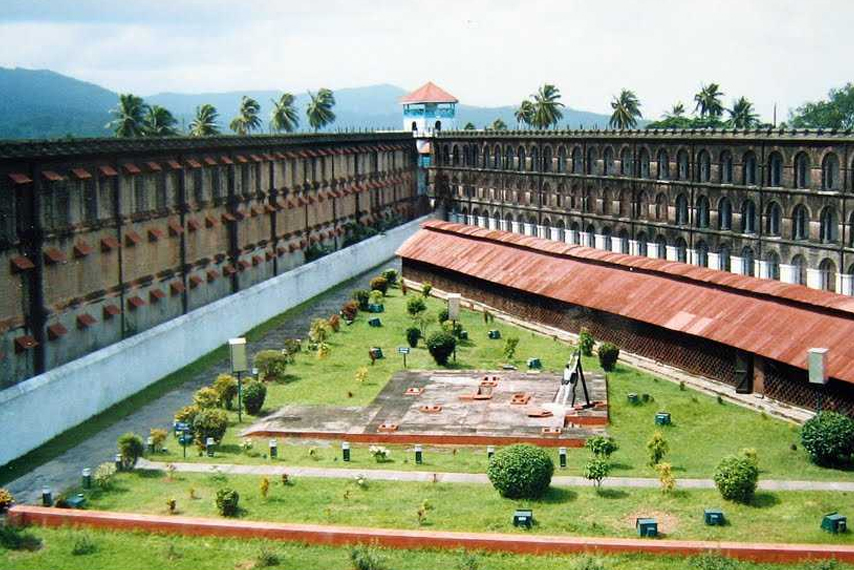 The Cellular Jail of Andaman is a special attraction for every patriot at heart. This place familiarizes you with the sorrows and anguish of the brave Indians who rose in revolt against the British rule in the pre-independence era of Indian history. The dark, dingy, claustrophobic cells of the historically infamous Cellular Jail has a veritable impression of the colonial era and narrates the hardships gone through by the valiant freedom fighters of our nation. Experience the poignant and brilliant saga of freedom struggle and the heroic deeds of the freedom movement through the soul-stirring Light and Sound Show of Cellular Jail held every evening in the premises. The deep voice of the veteran actor Om Puri’s baritone voice reverberates and sends a chill through the spine of the spectators while they listen to the happenings of one of the murkiest phase of British imperialism in India. 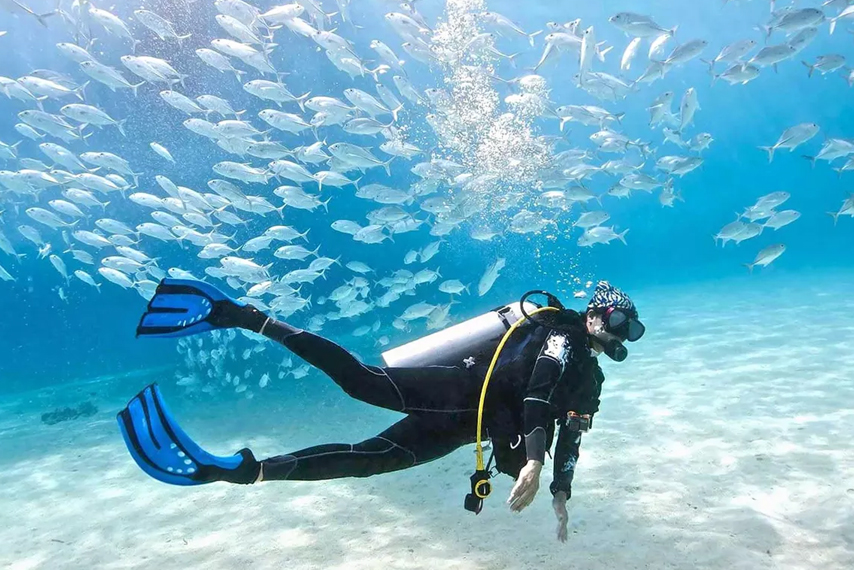 Discover the joyful secrets and explore the enchanting beauty of the underwater world of the exotic coral reefs and beautiful marine animals off the coast of Andamans. Let the ocean come to life with the varied types of fish, clams, oysters and hundreds of other marine creatures unfolding their secrets as you float around inside the deeps of the ocean. The enchanting underwater world will fascinate you and make for an unforgettable experience. The Elephant Beach of Havelock is a well-known and popular diving spot under the aegis of the best of the trained experts. 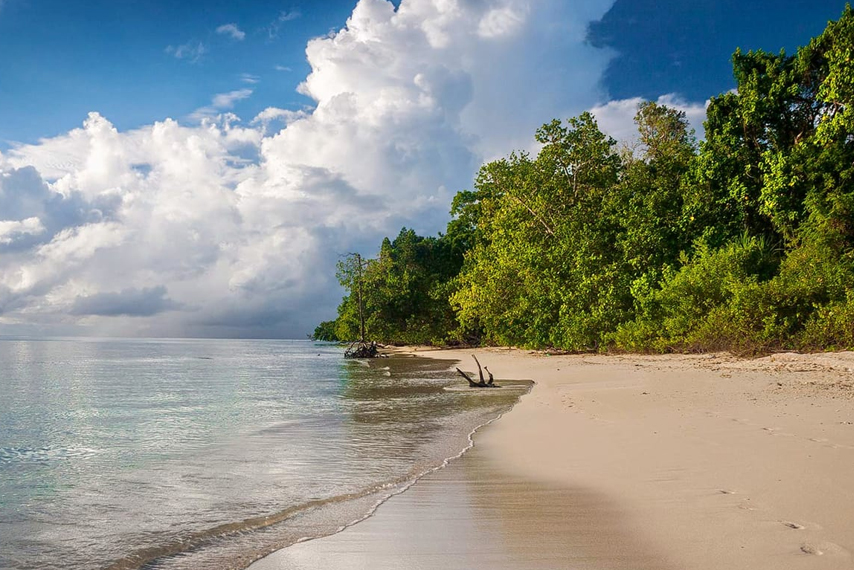 Radhanagar Beach of Havelock Island is the most acclaimed beach of Andaman and is also the most outstanding beach of Asia. It is a spellbinding beach replete in complete peace and serenity. It is also popularly known as the Beach No 7. Radhanagar Beach was marked the best beach of Asia in 2004 by Times. The long stretch of pearly white sands, flanked by ancient dark deep forests on one side and blue waters with gentle waves on the other, offer some scintillating memories of sunsets and sunrises. Laze around on the beach and breathe in its beauty as you gaze towards the blue ocean where it meet the blue skies. Swim in the gentle and calm waves and play with the colourful fish, sea animals and shells that crawl around or adorn the beach sands. The beach shacks provide some of the tastiest snacking options. Go out into the wide open Andaman seas in search of the elusive dolphins. On a dolphin watch trip in a cruise boat, catch the playful animals as they jump up and down and skim through the ocean surface. They swim playfully along the boats and sometimes come close to the boats to the joy of the spectators. The excitement and the thrill of a dolphin spotting adventure trip make for a crazy adventure for the entire family. Remain alert and keep your camera ready to catch the spirited creatures of the waves and ocean in their athletic best. During your stay in the Havelock island embark upon a kayaking expedition off the coast of the island into the darkness of the night. This expedition is remarkable during a new moon night. Get enthralled by the mesmeric illumination on the water surface caused by the bioluminescent phytoplankton the moment you row with your oars against the water. Also, discover a lot of information about the twinkling stars in the night sky and the constellations from your guide. The Ross Island is alluring with its greenery and colonial charm. It forms a must-visit destination while one is on an Andaman tour package and is currently known as the Subhash Chandra Bose Island. It is an island that exudes the historical charm of the days of British occupancy in India. The ruins of the Chief Commissioner’s house and the Presbyterian church, along with other ancient buildings in the style of colonial architecture still stand in dilapidated condition to enchant and haunt travellers. The island is a shady cove with hundreds of coconut trees lined everywhere and fresh breeze blowing on from the salty sea. Watch the squirrels flitting from tree to tree, the deer roaming freely and listen to chirping of the birds and the incessant lashing of the waves.

The Mystery of Endogenous Tribes Andaman Islands have always been associated with a lot of mystery and enigma regarding the primitive tribes that inhabit the various islands. Andaman and Nicobar Islands houses four Negrito tribes such as the Great Andamanese, Onge, Jarawa and Sentinelese. The ferocious Jarawas are the most enigmatic and seemingly fiercest aboriginal tribe that live in the islands of Andamans. They exist on these islands since time immemorial completely cut off from the civilized world. They follow their primitive ways of life and the ways of the sophisticated civilised world have not been able to teach them the modern and advanced ways of life. They reside in the South and Middle Andamans and you can gain knowledge and collect information about them or even meet some of them through the various expeditions and museum exhibits. Two more Mongoloid tribes of the Shompen and Nicobarese also inhabit the Andaman islands.